Year 1952, a body was revealed in a peat bog, in the
town of Windeby close to Schleswig, Germany. The owners of the local estate
settled on cutting peat in order to sell for fuel. Through the cutting of the
peat a body was discovered. Workers were forced to stop cutting into the peat as
the preserved corpse had been damaged to a great extent, where one leg, a foot
and a hand were detached from the body. Nothing in terms of tools or large objects were found with the
remains but on the body was found a woollen band covering the eyes and a collar around the neck. From these archaeological pieces of evidence, many theories arose of why, how and when did the being die? This was the
first body found in Windeby, known as; ‘Windeby Girl’. 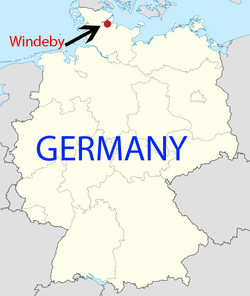 Though damaged at discovery, researchers
state that the body was well preserved in the time of over 2000 years lying in
the bogs. The environment that the body was found was just perfect for the
preservation of the body as it did not let in any oxygen keeping it from drastic
effects and changes overtime. High acidity levels prevented the increase of
micro-organisms used to break down body tissue thus leaving the body intact for
many years.
Quite astonishing though to researchers was how the body lay
undisturbed by humans and natural factors

By the state in which the body of Windeby Girl was found, the manner of
death most likely could have been homicide.
As in those days they were
thought to have lived in a spiritual sense, there are theories that suggest the
cause of death by sacrificial or judgmental reasons.
Having committed
adultery always has been a crime and in the case of Windeby Girl, she may have
been caught and sentenced to death as punishment.
Evidence also supports the
theory of sacrificial practice with the body being given as a sacrifice to the
gods, and with the blindfold found over her eyes, no clothing and signs of no
struggle on the body it also illustrates that Windeby Girl may have been a
willing sacrifice.
On the other hand, the body was slim indicating that the
victim could have suffered from malnourishment or illness causing the decision
for her sacrifice in order not to tear the rest of the population down by
spreading whatever sicknesses the body carried.

Forensic science and the use of modern technology have had a huge
impact on the archaeology and continuous preservation of bog bodies. In the past
scientists and archaeologist could not determine whether a body found in the
bogs was thousands of years or a couple of months old. Now with the use of these
new found technological advances the age and state of Windeby Girl could be
determined before her death, how long they were killed before being buried and
many other details. The main archaeological and scientific technique used on
Windeby Girl was the reconstruction of the face and time of death. The use of
the Carbon dating method (C14) gave the time of death being dated between 41 and
118 AD.
A discovery now known as the most important scientific discovery in
just the recent years was that Windeby Girl was in fact an approximately 16 year
old boy! This was proven by DNA testing, renaming the body as Windeby
1.

As research states that Windeby 1 was a boy who was
malnourished, we can guess that the life he lived was not high class and filled
with wealth. He may have been a working class who could not afford food and or
medicine to keep up his health. It could even be that he lived on land that did
not have flourishing harvest, making him sick and unable to live any
longer.

Has the Death been Proven? 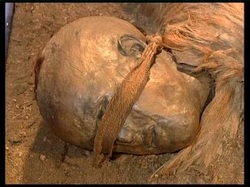 Though all the theories surrounding the death of Windeby 1 are accurate
to the times, there is nothing in fact to prove which one could be the actual
cause of death. With the most accurate theories being death by punishment,
sacrifice or mere sickness, research is still being done in order to get closer
to the truth. 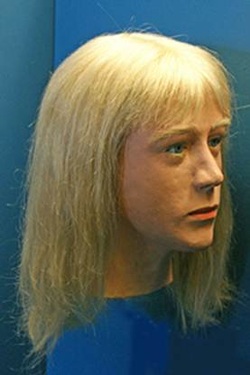 Archaeologist’s best guesses of the real to life look of Windeby
Girl when alive.
This is reconstruction of when ‘he’ was thought to be a
girl.
Powered by